Rebekah Walker has joined Tottenham Hotspur FC as the clubs new host. This follows the news that Spurs have started a new partnership with Twitch by launching an official channel on the world’s leading live streaming platform. Viewers will be able to take advantage of a live three-hour watchalong stream on match days, presented by Rebekah who is a lifelong Spurs fan. It will also feature N17 Live presenter Ben Haines.

Since the start of January, live watchalong shows have been available for all domestic home and away games. The channel will also feature training tutorials and tips from Tottenham Hotspur’s Global Football Development coaches and collaborations with Club partners. 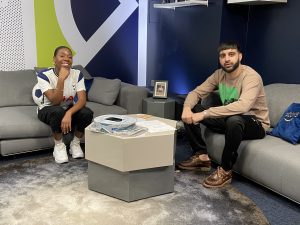 Rebekah says "Having been a huge Spurs fan my whole life, becoming the host of Tottenham Hotspur official Twitch channel is nothing short of amazing. If you had told me that I’d go from attending games and following the club to having the stadium become my second home – I would have had to ask for several receipts!”

You can follow Tottenham Hotspur on Twitch at twitch.tv/tottenhamhotspur